Elephants were recently in the news because animal activists managed to have elephants banned from performing in circuses. The freed elephants will now go into retirement in Florida. Yet most elephants in the world are not native to circuses – or Florida, for that matter. And in Africa and Asia, elephants can pose a threat to farmers’ crops and sometimes even their lives. 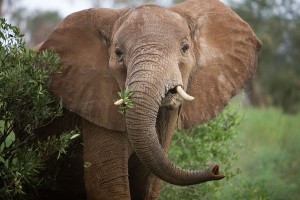 The relationship between humans and elephants is so troubled that there is actually a name that scientists use for it: Human-Elephant Conflict, HEC. Not only are elephants very smart and powerful, African elephants also need to eat up to 300 kg of food a day, depending on their size. That’s a whole lot more than a mouse which has found its way into the corn shed will eat. And a loss of that size will not go unnoticed by the farmer, making the relationship between farmer and elephant even more volatile and aggressive.

The cheapest and most common way that farmers use to guard their crops against raiding elephants is simply that: guarding. Humans will stand on the perimeters of the plantations and will try and drive elephants away with noise – guns, firecrackers and car horns can do the trick – or by using bright lights, for example. But keeping the crops safe this way is incredibly labor intensive and not every farmer can afford hiring personnel for this task. Not everyone wants to stand between an elephant bull and his food either, and many who do do not survive.

Guarding will likely always be needed as an extra measure, but considering that, in India alone, one hundred people annually die from injuries sustained during elephant crop raids – and about half that number of elephants – this cannot be the only defense farmers have.

Most other methods are simply too expensive and even after large amounts of money have been invested, many elephants are too smart to be bothered by these techniques for long. Some are even more dangerous for the crops, as some farmers use fire to repel elephants, without – of course – being able to control the wind. And again: elephants are smart and they have been known to put out small fires themselves.

But biologists have developed a genius solution that is safe for human and elephant, makes money instead of spending it, and even helps crop growth. The answer is simple: Bees.

Elephants are afraid of bees. That might seem counterintuitive, as their hide usually protects them from a bee’s sting, but they have sensitive trunks and apparently have had enough run ins with bees throughout their evolution that they become scared from the sound alone.

The beehive-fence is thus a genius solution. Beehives are erected around the farmland, each about 30 feet from the other. When an elephant approaches, a small trip wire – attached to the hives – disturbs the bees and off they buzz. An elephant would have to be extremely hungry to withstand a swarm of angry bees.

The beehives have additional benefits. As everyone knows, bees produce honey, giving the farmers’ another sellable product. They pollinate the crops and are easily introduced in Africa, where the tradition of beekeeping is well known.

There’s an entire subchapter of the Save the Elephants organisation – Elephants and Bees – that is committed to make this practice more common. They provide farmers with a free instruction on how to set up a hive or relocate existing hives to create a fence.

The beehive fences were initially tested in Kenya and since they received such good results have since been exported throughout Africa and even to Sri Lanka. In Kenya, for example, the project was 80 percent successful.

Elephants and Bees also helps farmers sell their honey, though at the moment someone who is interested in a jar of elephant friendly honey still has to travel to Nairobi and the Tsavo area.