There has always been, and still is, a very evident gender gap between students taking certain subjects. Male dominated subjects often include ICT, sciences, P.E., maths and woodwork. Female dominated subjects are often viewed as ‘softer’, subjects such as English, Art, Childcare and Dance. Way back when, (let’s say, Victorian times), this was not an issue because women would need to be the softer ones, staying at home looking after the children, cooking and cleaning, whilst men had the ‘brains’ and could go out to be the money maker for the family. The breadwinner, as it were. It ‘worked’, shall we say. 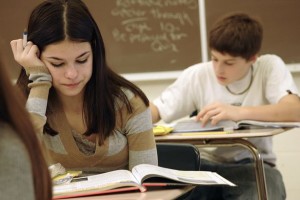 But now, in a time when women and men are almost equal in terms of education and work, should the gender gap between students in these subjects be an issue? Obviously, yes. It should. We live in a time where we no longer have to conform to gender norms – women don’t have to cook and clean and look after children. Men don’t have to work hard in laborious jobs to provide for a family. Now, women want to be scientists, computer whizzes, athletes, inventors. Men want to write for magazines, perform on stage, look after children. Not only are gender norms being challenged, but they’re almost being turned right on their heads in some instances.

Of course, there is still a huge bulk of students who do conform to gender stereotype lessons. A lot of girls do naturally prefer creative subjects to practical, and a lot of boys prefer practical to creative, and this isn’t an issue at all. The issue comes when a student wants to do a certain subject but is scared of being judged for not conforming to a norm, for being a minority in a class and therefore discriminated against.

With there being so many same sex couples, single parent families, stay at home dads and breadwinning mums, individuals sometimes have to play the reverse role to their gender stereotype. Some dads have to play mum, and vice versa. With this being so widely accepted as a family unit, why can it not also be widely accepted in terms of subject choice too?

The Benefits of Same Sex Schools in Removing Stereotypes

It is in instances like this that same sex schools can actually be deemed advantageous – there is no judgement in lessons, no minorities. Students can freely participate in all lessons and subjects without the fear of being dominated by the opposite sex, without feeling out of place or judged. Girls can participate in science one hour and then dance for another hour.

Boys can participate in maths for an hour and then cookery. Choices are more open to pupils and therefore when they leave school, they are more open to the idea of working in an industry that is perceived as one for the opposite sex and not for them – this boosts confidence and drives ambition.

Now in same sex schools, there is less chance to participate in lessons deemed as ones for the opposite sex however it does prepare pupils for what it will be like to work together in future. Girls get a taste of what it’s like to do sports with boys, boys get a chance to see what it’s like to dance with girls – this prepares them for the future industry they want to go into, better than a same sex school could do.

What needs to happen now is for the two different kinds of schools to learn from each other. Same sex schools need to prepare students for working with the opposite sex and co-ed schools need to take on the education approach that same sex schools have, encouraging boys to do ‘girly’ subjects and girls to do ‘boyish’ subjects. Only then can we hope to achieve a close on the gender gap between students. It’s time to fully kiss goodbye to the gender norms in schools and let students be the individuals they want to be