I have to admit one of my bigger regrets in life is going directly to college from high school. It was a mistake, and it took some time to correct as I failed miserably at my first college. Looking back on my mistakes, I feel that I probably made a few poor decisions. I also think back to how I could have corrected, or prevented those decisions before, or directly after I made them. While joining the military probably wouldn’t have corrected the mistakes that I made, at the very least, I probably would have been wiser starting college at 22, than at 18. 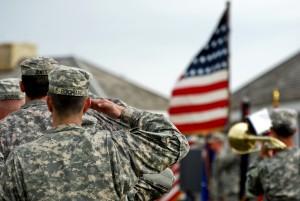 When you join the military, police, or fire department. You learn a few things. First and foremost is the importance of respect. As you probably have heard many times before, the cornerstone of discipline is respect. In the army, this is drummed into your heads in a variety of ways both figuratively, and on occasion, literally. Occasionally, your platoon mates might find it prudent to take you out back and beat the crap out of you. But back to the topic of respect, respect starts with rank. There is always someone above you, someone who you need to obey orders from. The military also teach young men and women, the importance of respecting their bodies through regular Physical Training Sessions, and strict physical standards. With that being said, from the beginning of a military career, you will be forcibly made to understand the difficult concept of respect. Another thing you will learn in the armed forces is discipline.

Discipline in any military unit needs to be reasonably harsh. You need to control your actions. Otherwise bad things could easily happen. You need to work as a team to get stuff done. Teamwork is extremely important in a military environment, and from the outset, soldiers are trained to work with a buddy as a minimum. Unless you are in one of the special units, it is extremely unlikely that you will be working alone. You will most likely always have a buddy covering yourself. While you may not be exactly safe, you know that you always will have someone who will be looking out for you even though it may be at extreme risk to their personal safety. You will also do the same for your buddy.

Now you are probably reading this and wondering, why is the military a good altenative to college, and how does this relate to a college environment. When I went to college, it seemed to me, that it was every person for himself. Unless you were watching your own back or had family nearby, it would be very unlikely that someone would have covered for you. On the topic of discipline, nowadays a person with a lot of self-discipline is really rare to come by. Yes there are a few people out there, who will push themselves harder and farther than before just for the sake of self-improvement, but this seems to be the exception rather than the norm. Another way that military discipline would have helped is that when I first started college, I wasn’t there to learn, I was there because all of my friends were going for a degree. This was a really bad reason to go to college.

To conclude, if you are 18 and clueless on why you are going to college. Don’t just dive in and go. Think up some alternatives, and seriously consider joining the services.