He might be most famous for discovering America, but what Christopher Columbus really introduced to Europe was the chili. Columbus, thinking he was in India, erroneously named the fruit chilli pepper, believing he had found red pepper. After returning to Europe he brought some chili peppers with him and during the 16th century the Portuguese brought the chili to Asia. Now, one can hardly imagine Asian food without chili anymore and, ironically, India has become the biggest producer of chili peppers worldwide. 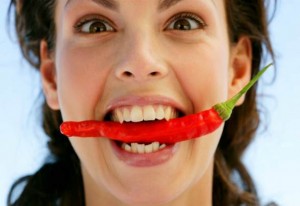 Chilis are not for everyone but there are chiliheads that live for the kick. The kick come from the capsaicin in the chili. This substance works like a fire alarm for the nerves. The body then sends information leading to a better blood flow in the area, and for an increased flow of saliva and sweat, meant to cool the body. Even more, the body also releases endorphins, granting a small high to those that dared consume a chili.

Some psychologists see eating a chili as a “constrained risk,” since it gives people the thrill of danger or pain but is in fact not harmful at all. Contrary even, because consuming is actually healthy and can make lessen the danger of getting certain types of cancer or a heart attack.

The spiciness of chilies is measured on the Scoville scale. The American pharmacologist Wilbur Scoville tested capsaicin on test subjects by diluting it with drops of water. The numbers on the scale are large, as they signifiy how many drops of water were needed to neutralise the capsaicin.              For a long time the Scoville scale, invented around one hundred years ago, ranged from zero to 300,000. The bell pepper marks the zero on the scale and is included on the list and scale because it actually derived from the chili and was only later bred to not be spicy. The Habanero chili from Mexico used to be the spiciest pepper on the scale, but that has long since changed.

Between 1994 and 2007 the Habanero had to fear for her top spot and was ultimately dethroned by the Red Savina Habanero, which has a whooping 570,000 Scoville. But that is still nothing compared to what would haven afterwards: The military got involved.

The Indian military had been growing chili for its pepper sprays for quite some time, but when the chili arms race began they presented their new weapon. A chili called Bhut jolokia, which is 400 times more spicy than a regular tabasco sauce and rates above one million on the Scoville scale – depending on the region it was grown in, the number varies between 300,000 and 1.5 million.              The bhut jolokia was quickly surpassed by the Infinity chili, developed by a former member of the British Royal Air Force. That success only lasted two weeks, and a new chili was introduced. It goes on and on. Currently the hottest chili is the Carolina Reaper that measures at 2.2 million on the Scoville scale.

The Chili Pepper Institute at the University of New Mexico – yes, that exists, rates the spiciness of the chilis and is the only institution that chili fans believe in. Yet with each introduction of a new chili it does not take long until volunteers post videos online, showing them eat the chili and then vomit, gargle with milk or react otherwise to the capsaicin.

For people that do not feel comfortable trying chilies in the comfort of their own home – some chilis are so strong they can lead to hallucinations and intense pain – there are also a multitude of chili festivals. The biggest of which takes place in India, of course, and the current record holder, Anandita Dutta Tamuly, is also from India. She can eat up to 60 ghost chilis in under a minute and is famous for rubbing the seeds of 25 chilis in her eyes without crying. Only birds, immune to capsaicin, can probably break her record. But there are enough humans willing to try time and again.