Ever Feel Like Time is Moving Too Quickly, Here May Be The Answer If there is one thing that there never is enough of, that thing must be time. The funny thing about time, is that looking back on a specific event that happened, it always seemed like it happened so long ago, yet when you look back on a certain period, say you college years, don’t you think that they went by in a flash. Some of the leading scientists in the world have come up with a few theories behind how we perceive time, and why in some cases, it feels like the clock is moving like a snail, yet in others, the years went by in a flash. 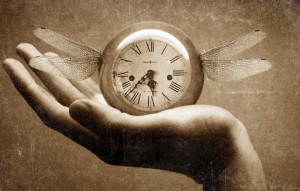 As we get older, everyone seems to wonder how time went by so quickly? Lets face it, a year is a year, and it is the same length whether you are 5 or 50 years old. The only thing that changes is our perception of time. There are many different reasons for this. One of the earliest theories of Time Perception was created by William James, a research Psychologist, all the way back in 1890. In his book, Principles of Psychology, James argued that the reason for time appearing to speed up with age was that there were less events that were memorable, as time moved on. Lets face it, he isn’t exactly wrong on that reasoning. Aren’t there more events that you will remember from 18 to 25, than you will from 55 to 60? There are simply more things that take place during that time range. This is a very good theories but there are also newer theories, that are being created, today as I am writing this out. For example, in 2005, 2 researchers from Ludwig Maximilian University in Munich Germany came out with a new study. The results were pretty surprising, yet also understandable at the same time.

In their study, Marc Wittman and Sandra Lehnhoff interviewed 499 people, with ages ranging from as young as 14 years old to as old as 94 years old. What they found out proved to be pretty interesting. While they did confirm somewhat that time will fly as you age, they also had a startling discovery, time will start flying after you turn 20, and will keep flying until peaking at 50 years old. From then onwards your perception of time will remain steady until you are in your mid 90’s. Another interesting thing that this study found was that all people perceive time the same way, when it came to smaller periods, like 1 hour, or 1 week. It simply didn’t change. One reason why people may perceive time differently may because of Time Pressure.

Throughout life, we all have pressure. We have places to go, bills to pay, meetings to have, and taxes to pay. Things need to get done now, and so on, but in short nearly everything in life seems to have a deadline. What this study showed is, while we all know we have more pressure to get stuff done quicker when we are younger and middle aged, the older group tended to not have the same pressures. As researchers have recognized this fact, there was another psychological study done, on how people remembered events. This study was composed solely of college students, and retirement aged adults. The results were pretty surprising too, as what they found was that the 2 groups remembered the events that they were asked about. Also the younger group tended to have less accuracy on the age of events than the older group. This still doesn’t explain why the older group felt that the decade went by much quicker than it did. Perhaps the next study on memory will do that.

In conclusion, the perception of time is one of the biggest mysteries in the world. Eventually, some one will hopefully figure out why time is perceived the way that it is. As of right now though, they are off to a pretty good start.