Around two fifth of all medications used by humans are ingested orally. The problem with ingesting pills orally is that it is hard to determine the dosage. Since they are not used locally, as for example an ointment, complicated calculations have to be made in order to find out how it takes for the gastro-intestinal system to absorb the active ingredient of the drug into the blood stream. 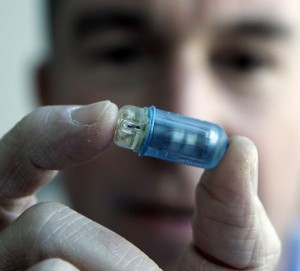 So what if humans could simply ingest a computer chip, a thermostat, a battery, a pump a pH-sensor and a capsule of medication to make sure that the right dosage is delivered exactly to the right part of the gastro-intestinal system that can absorb it best?

What sounds like extremely unpleasant and incredibly futuristic is on its way to become reality.

The Dutch medical engineering company Medimetrics introduced a pill of this kind for the first time in 2009. Now, the pill, called “IntelliCap” is close to being introduced into the market. And while the pill indeed contains all of the abovementioned electronic parts, it is in fact not much bigger than a regular kidney bean.

The pill can contain the active ingredients in liquid form, as a powder or as a hard material and the built in pH-sensor measures where in the gastro-intestinal system the pill is located at any given moment. The computer chip then delivers that information to a computer – which thankfully does not have to be swallowed – and the doctors can decide from the outside when the ingredient should be released.

Although the pill is not yet available on the free market, it has already convinced many of its potential, even earning the innovation price of the European Union in 2014. Research on intelligent electronic pills has by no means been completed and the ways how these pills could help patients and doctors seem endless.

Proteus Digital Health, a medical engineering company from the United States, has developed a chip no bigger than a single grain of salt. This chip can be attached to any regular pill, instantly converting it into a smart pill. Once the chip registers contact with the gastric acid it sends a signal to a plaster which, in turn, sends a signal to a smart phone. This allows patients to be aware of their medication themselves, without the help of a doctor.

One particular field of research is the attempt to develop smart pills that are small enough – nano and micro pills much smaller than a kidney bean even – to be able to reach every single part of the body. The hope is that these pills will be able to be directed to for example tumors, battling them locally and precisely.

The idea that humans could ingest electronic pills is not new and researchers have been looking for ways to make this feasible since the 1970s. But apart from a few ingestible medical devices, not many have made their way to the market yet. The new smart pills might be the first step in that direction, as their introduction looks like it will be successful. It is possible that a mere decade from now, patients will be ingesting electronic devices as part of their treatment.

As with any new medical introduction there are risks that need to be eliminated first, such as the electronical devices ultimately being harmful to the patient’s body. Obviously the new technology thus has some critics as well. However, many see the electronic pills as the biggest revolution in the field of medicine since the introduction of penicillin, which was discovered by Alexander Fleming in 1928.