The B-52 Still Going StrongLanding at the Al Udeid Air Base in Qatar earlier this month were none other than the U.S. Air Force B-52 Stratofortress bombers. To eliminate ISIS’ presence in Syria, Iraq, and other Middle Eastern countries, these bombers are part of Operation Inherent Resolve. Reportedly, the planes will drop smart bombs with GPS guiding, as well as more conventional 500-pound bombs directly on identified targets. However, the bombers will also be used for monitoring and communication purposes. 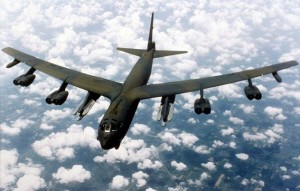 Measuring 160 feet long, these Boeing planes were given the nickname BUFF, which is the acronym for “Big Ugly Fat Fucker (Expletive).” Their history is solid, including setting a record for a non stop flight around the world, making an appearance in “Dr. Strangelove,” and patrolling borders around the Soviet Union 24 hours a day for eight consecutive years while armed with nuclear warheads.

For 60 years, the B-52s have been a part of the United States’ arsenal of weapons. The planes saw action during the Serbian conflict, in Vietnam, during the Gulf War, and in the Afghanistan and Iraq wars. Miraculously, 76 of the 744 B-52s built from 1952 to 1962 are still active, working alongside the B-2, known for its stealth ability, and the B-1, which has supersonic speed.

Currently, B-52s are maintained at different air force bases, including Minot Air Force Base in North Dakota and Barksdale Air Force Base in Louisiana, both under the watchful eye of the U.S. Air Force Global Strike Command. In addition, there are reports that a few of the planes are kept in California at Edwards Air Force Base. The B-52 will continue to fly through the 2040s due to unrivaled success in combat as well as budgetary constraints.

There are actually many reasons for the B-52’s staying power, which started with an advanced concept for the original design. As stated by a directorate representative, this plane was over- and under-engineered. The B-52 is extremely flexible, giving it the ability to remain relevant. At the same time, it can easily adapt to current and emerging global threats seen today.

“Under-engineered” means the plane offers ample physical space for additional components and systems. Typically, a plane is designed with tight tolerances. As such, it is packed tight with hardware. Unlike traditional planes, the B-52 makes it possible to take something out in exchange for adding something in.

Throughout its lifetime, flight hardware, avionics, and weapons systems on the B-52 have all been upgraded. For example, at the midlife point in 2006, an upgrade was performed to the avionics. For that, modern navigation systems and processors were added. Then two years ago, the first new communications system was installed in the B-52. Included was a full-color LCD instead of cathode ray tube-type screens.

From a weapons point of view, when the B-52 is upgraded, it will have enhancements to the radar system and be capable of holding more smart bombs. The same digital radar system in the F-22 Raptor will be added, making resolution higher and more precise. In addition, the B-52 will get Link 16, which is a tactical data system designed to improve targeting capability while in flight.

Although the B-52 is continuing to be upgraded, the fact is that this plane is still old. This is where the term “over-engineered” comes into play. While the airframe is still structurally sound and it can provide many more years of flawless service, most of the airframes are original. This design is a true testament to the engineers who developed the original design, something well advanced for the time.

In fact, even the interior seats, wing control surfaces, cockpit yokes, tail assembly, cable linkages, and flight controls remain much the same as when the plane was first built. As expected, to ensure optimal flying and safety, frequent inspections of the B-52 are performed. In addition to this, heavy inspections are done every four years. Based on the findings, structural and mechanical elements are replaced according to need. However, the B-52 flown today is very similar to the original plane.

To ensure that the B-52 stays around for a long time, new tactics and procedures are deployed by the expert team in charge of boosting its lifespan. This involves evaluations for structural integrity, inspections for non-destructive elements, studying the way in which the airframe ages, and methods for keeping this iconic plane in optimal condition. For the military, as well as aviation as a whole, the longevity of the B-52 is uncharted territory with a bright future.