The refugee deal between Turkey and the European Union is viewed as a big step by many, yet proponents and enemies of the deal have different opinions regarding the step. One of the conditions of the deal was that the EU remove visa requirements for Turks. It looks like this will soon become reality. Certain conditions and hurdles still remain to be met and passed, but since the European Union has something to lose if the deal does not go through, it seems likely to observers that it will happen. 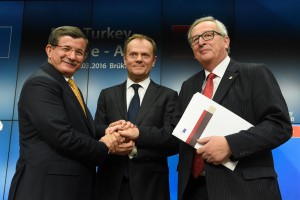 The European Union and Turkey have been discussing this step since 2013, as a part of their negotiations about Turkey accession process to the EU. Initially, the requirements were meant to be dropped by October this year, but during the negotiations for the refugee deal Turkey insisted that the step take place in June if this year already.

Turkey applied to become a member state to the EU back in 1987 and has been in close political contact with EU member states for much longer, going back to 1949. Although many Turks already live in Germany – and have lived there for generations – Germany is one of the main opponents of an accession of Turkey to the EU.

If the visa requirements are to be dropped, it would mean that Turkish citizens no longer need to apply for a visa in order to visit all 26 Schengen countries but it does not mean they can come to the European Union to stay indefinitely. Trips will still be limited to 90 days each two quarters.

In order for Turkey to be granted this step, Turkey is required to fulfill 72 criterias. In May of this year they only fulfilled 36 – and not all of them fully – but that number has risen to 64 this week. The big points of discussion are still the fight against terrorism and legal standards in Turkey. It is highly likely that the EU-commission will still agree to the step and ask Turkey to fix the remaining criteria until June, when the deal is supposed to come into effect.

It is not yet clear if the decision will pass all necessary entities. Even if the EU-Commission agrees, the deal will still have to pass the European Council and the European Parliament and there are still many that do not agree that this is the right decision.

Recep Tayyip Erdogan, president of Turkey, has long since promised his citizens that he will take care the EU remove unfair hurdles for Turks, so he would not look kindly on an EU decision not to go through with the deal. Ahmet Davutoglu even threatened that he would revoke Turkey’s decision to take back refugees that illegally crossed over to Turkey – and this is the main cornerstone of the refugee deal.

The migration agreement, which was reached in March, includes Turkey taking back illegal migrants and sending legal refugees to the EU. In addition to that, Turkey receives six billion Euros from the European Union and receives visa liberation.

Turkey is by no means the only country whose citizens would be able to travel to the European Union member states if the deal became reality. Millions of citizens from more than 50 different countries can enter the EU without applying for a visa beforehand. Among these are countries like the United States, South Korea, and others. As well as three pre-accession states to the EU: Albania, Montenegro and Serbia.

Since the refugee deal between the European Union and Turkey helped curb the number of refugees that enter the European Union, the EU will probably try to make the deal pass. Even if the deal comes to pass, Turkey’s 75 million citizens can only make use of it after acquiring a biometric passport. Lines at the passport offices are bound to be long over the next few months.