The headline alone may make it sound as though this is playground talk, but it is a very real conversation between North Korea’s foreign minister and the Associated Press. If you stop conducting military exercises with South Korea, we’ll stop testing nuclear weapons… So they say. 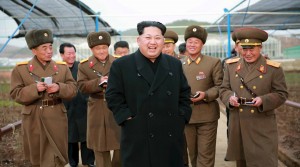 In an exclusive interview with AP, North Korea’s foreign minister Ri Su Yong had a few things to say about North Korea and their nuclear weapon testing. The first was that it was the US that had driven North Korea to developing and testing nuclear weapons in the first place. He went on to say that they needed to be created as a deterrent, when the US army began military exercises in South Korea. He then went on to say that if the US stopped their military exercises with the South Koreans, then it could help reduce tensions and prevent the need from nuclear weapons testing.

The whole thing has come as a bit of a shock to the rest of the world, no less so because this is the first interview Ri Su Yong has given to any Western news outlet. It’s quite well known that the North Koreans like to keep themselves to themselves, focusing on their own press and ignoring the rest of the world. In the interview, the foreign minister made some chilling comments, including this:

“If we continue on this path of confrontation, this will lead to very catastrophic results, not only for the two countries but for the whole entire world as well.”

That does sound like a cross between playground taunting and a rather dark threat, that only the president of the United States will know how to respond to. He can either agree and withdraw his troops from South Korea, or see whether the North Koreans are simply just trying to flex their muscles.

Considering this isn’t the first time the North Koreans have made (and broken) a similar promise, it’s going to be a tough decision for the US. It seems as though America won’t back down until North Korea end their nuclear weapons program first. And it seems as though North Korea won’t do anything of the sort until the US military leaves South Korea. Who will make the first move?