To some people, it appears as if virtual reality is simply a passing fad used by a generation of people who have nothing better to do with their time. However, perhaps there is an actual necessity. Regardless, being able to experience virtual reality is amazing. With this technology, people can experience a game or movie in a completely new dimension. 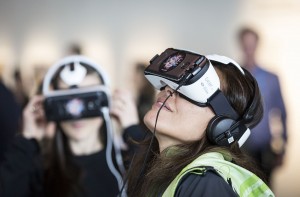 With virtual reality, exploring other worlds becomes very real. This mind-blowing experience is hard to describe but definitely something that everyone should try at least once. Virtual reality creates something different and unique, but is it a necessity or just a fleeting fad?

The best way to describe virtual reality is that it provides an extension of a person’s own capabilities. Using the combination of science and technology, different virtual reality gadgets are made, including smartphones that can be strapped to the forehead and an actual headset. With either one, people have the opportunity to experience a cool new world.

At this time, virtual reality is all the buzz, but many people question if it will last. Some feel it is a phase used to occupy the time of kids and bored adults, but others disagree. Although cool and exciting, some people believe that, in time, virtual reality will begin to fade, something that was seen with the Nintendo DS.

Initially, the idea of wearing a futuristic headset to experience a new world is enticing and exciting. However, is this something that will continue to draw demand and enhance experiences, or will it start to fizzle out? After all, when you think about a virtual reality headset, there are limitations, or perhaps not.

Beyond the average user, virtual reality is getting a lot of attention from a surprising group of people. Astronauts from NASA have developed Dynamic Onboard Ubiquitous Graphics, otherwise known as DOUG. This virtual reality technology can actually help prepare astronauts for expeditions into outer space by showing them what to expect.

Since 1990, there has been a project in the works that provides astronauts a real-life experience consisting of different problems that they might face before leaving Earth. As part of DOUG, astronauts learn how to walk while in space as well as perform daily activities and deal with unforeseen emergencies, all while having no friction or gravity.

Before taking their first real steps in space, astronauts are required to participate in the program several times by living through virtual reality. Ultimately, this creates the same sensations they would experience in space. Because of this, astronauts learn how to respond normally to various situations while being in a zero-gravity atmosphere. Since it is common for astronauts to struggle with surroundings while in space, this virtual reality technology has been extremely beneficial.

The technology used with DOUG is complex and sophisticated. In fact, it is so smart that it can recreate many space environments. For instance, astronauts can learn what it feels like to walk on the surface of the moon and how to get around asteroids. Although there are certain limitations, experts believe that, one day, NASA will use DOUG to help astronauts going to distant planets.

Interestingly, virtual reality has also been used to reduce the impact of depression and loneliness that goes hand-in-hand with space travel. For people interested in a more dynamic experience while playing games on Xbox or trying something more advanced than a 3-D or 4-D camera, virtual reality may be short-lived. However, for NASA astronauts, this technology is making work more efficient while enhancing ability.

Even if virtual reality diminishes in popularity among gamers and moviegoers, this is a remarkable way to have a new experience. However, considering how beneficial virtual reality is to NASA, there is hope that this technology will help other industries at some time in the future.