Think of some of the largest companies using advanced technology that you can. Now think about exactly what it is that they sell. It’s probably nothing, right? That may sound like a weird concept, but bear with us while we explain the logic behind why the biggest tech companies actually have nothing to sell. 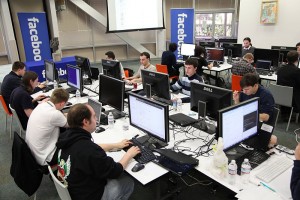 If you’re not following on, here’s an example. Facebook, a popular social media site that has hugely changed how everyday people use technology, both within their own homes and while on the go, sells nothing. They are effectively a website, yet they do not produce any of their own content. It is entirely down to the users. If there were no users, there’d be no Facebook. Yet they managed to be one of the most profitable tech companies of the 21st Century, by selling nothing. “What about the adverts?!” we hear you cry. Sure, Facebook does sell advertising space… But that’s it. They don’t create the content (although they have a say in what is shown), that all comes from its users. They’re selling nothing to you, while at the same time being able to sell everything. It blew our minds too.

Another example is Uber taxies. They are one of the most popular of all the taxi companies in big cities such as London, they frequently offer discount codes and are even used by celebrities. Not to mention the fact that they are the world’s largest taxi company too, with more cars than any other… but they do not own any vehicles. Not a single one. Instead, the drivers hired by the company use their own cars as a taxi. All they’re managing to sell is the use of their app. They’re effectively a middle man between a taxi driver and someone wanting to get somewhere. Nothing more, nothing less.

Similarly, the highly popular holiday site, Airbnb specialises in helping people find places to stay in countries all over the world… and yet they own no real estate whatsoever. The houses are owned by individuals and families who are willing to loan out their home to people for their holidays. Again, this company simply acts as a middle man between those who have a place to rent and those who want to rent a place.

What is Happening Here?

Well, what we’re seeing is a direct transition of power from businesses to the clients. Not only power but trust, too. Companies like Facebook, Airbnb and Uber are all trusting their clients, trusting the people who use them to help run them too. Businesses are now being run by their users, and it’s not going to be long before more and more companies adapt to this new format. So what are the pros to businesses being run in this way? Well, it means that businesses don’t have to invest as much money to start up, providing more people with opportunities to set up their own businesses. It also means that with less outgoing costs, these companies can make profit upon profit upon profit. However, where there are pros, there will always be cons, and the major con is this; trust. While it’s great to have customers so involved in running the business, if they begin to lapse at their jobs, the company as a whole can be affected, which isn’t really ideal. An additional con is if people no longer are interested in “running” the company e.g. if people no longer want to use Facebook. There will be no more content on Facebook, no one paying for advertising and so the company will die out.

It’s an interesting development and one that is definitely going to impact on future businesses. If you’re planning on becoming an entrepreneur we have one word of advice: don’t own or sell anything, let the business come to you