If someone were to tell you about an ultracool dwarf, your thoughts might go immediately to Tyrion Lannister, arguably everyone’s favorite character on Game of Thrones. Though while Game of Thrones’ sixth season just started, there’s another ultracool dwarf in the orbit that should interest people. 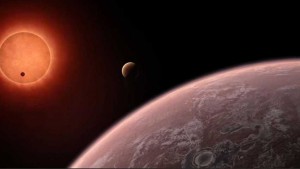 The dwarf in question is called Trappist-1. He does not curse and drink, but he could be of major significance to humanity. Trappist-1 is, in fact, a brown dwarf, 40 light years away from Earth. He is about as big as the planet Jupiter and while not ultracool by most people’s standards, he is considered very cold by stellar standards. He burns at a temperature of 4,400 Fahrenheit and is not in the visible wavelength.

Being a brown dwarf, Trappist-1 is one of about 15 percents of objects of this kind that are close to the sun.

A new study, recently published in the science magazine Nature, now reports that Trappist-1 is orbited by not one, not two, but three planets. And these planets, which makes them so interesting, are possibly the most Earth-like planets outside our solar system. The fact that these planets are Earth-like means that there is a possibility that there could also be life on these planets.

Trappist-1 was named after the telescope that was used to observe him. The telescope, 60 centimeters long and located in Chile, is called TRAnsiting Planets and Planetesimals Small Telescope. The authors of the study, scientists from the Massachusetts Institute of Technology and the Belgian University of Liege began searching for Trappist-1 by aiming the telescope at the stars for a long period of time. This way, they hoped to see when one of the stars is orbited by a planet.

Since Trappist-1 is so dim that he cannot be seen in the visible spectrum, the scientists had to risk looking in the infrared spectrum, something that requires special equipment and instruments. In this case, the gamble worked and they were able to see Trappist-1 glow. The telescope was aimed at

Trappist-1 over a period of 62 nights, and 254 hours in total. The fact that the star appeared to be dimming over and over again led the scientists to believe that there are three planets orbiting him. Each one of them is about the size of planet Earth and they are all close enough to Trappist-1 to fulfill the condition for the existence of liquid water on them. The three planets are all much closer to the star than Earth is to the sun. As is well known, Earth needs 365 days to orbit sun, meaning that the distance is rather large.

The three planets orbiting Trappist-1 take 1.5, 2.4, and 73 days – a sign that they are closer, which they would also have to be, considering that Trappist-1 is so much colder than our sun. The two closer planets are more unlikely to host Earth-like life than the third planet. This is the only planet that orbits in the so called Goldilocks zone, meaning that should there be liquid water on the planet, it could be everywhere on the planet.

Unfortunately, 40 light years are relatively close, yet not close enough for current spacecrafts being able to reach it. It is now up to researchers across the globe to find out if this third planet has other necessary conditions for Earth-like life. They need to figure out if the planets have an atmosphere, and if this atmosphere contains gases like methane, CO2 and oxygen.

Since we are unlikely to be visited by inhabitants of this ultracool dwarf in the near future, humanity will have to resign itself to closely following the travels of Game of Throne’s ultracool dwarf.