The lawsuit by an American woman against McDonald’s because she had burnt herself with the too hot coffee has become iconic. In the 1994 Liebeck v. McDonald’s Restaurants lawsuit the jury awarded the plaintiff, Stella Liebeck, with a payment of nearly three million dollars. She ultimately received 640,000 dollars, and the trial became famous enough to warrant its own HBO show, Hot Coffee. 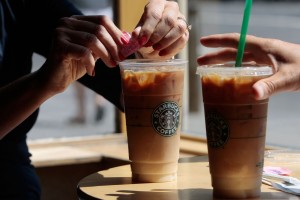 The case was referenced by Jay Leno as the quickest way to make your first million and was parodied by the popular show Seinfeld. Since the trial showed that McDonald’s had received roughly 700 complaints about coffee being so hot that it lead to burns and because they were aware that at over 80 degrees Celsius their coffee was indeed incredibly hot, McDonald’s lost. Even though, one must say, the National Coffee Association says that a perfect coffee should be around 185 degrees Fahrenheit, which equals about 82-85 degrees Celsius.

Now another giant chain is being sued but this time the drink in question is too cold. Stacy Pincus is suing Starbucks about the amount of ice cubes in its cold coffee. Her main point: Starbucks is advertising the iced coffee as 500 ml of coffee, yet in reality it often contains only about half of that amount and the rest of the cup is filled with ice cubes.

She has a point, though it remains to be seen whether a judge and jury decide that the point is good enough to warrant the over five million dollars she is suing for. To make her argument more easily understandable, the statement of claims contains the following argument:

But Stacy Pincus is not ending her claim with the iced coffee. She is also claiming that Starbucks is falsely advertising other cold drinks and asking for higher prices for cold drinks than for hot drinks.

Starbucks representatives stated that they are not concerned about the lawsuit. According to Starbucks, customers know that ice cubes are a main component of their drinks and that they could always ask for a different preparation if they are not satisfied with their drinks.

Fast Food chains have been subjects of multiple lawsuits regarding their food and drinks. For example, Subway was sued over the claim that their footlong sandwich is not actually a foot long.

McDonald’s, too, is involved in a lawsuit again. Paulette Carr, a Los Angeles native, is suing a McDonald’s Drive In restaurant for not having properly fastened the lid on her coffee take-away cup, leading to the coffee being spilled in her lap. Her lawyer, Sheri Manning, was initially not willing to disclose how serious the injuries were and how much money Carr was suing for.

McDonald’s and Starbucks have been involved in a few similar lawsuits, but they do not stand alone. Chick-Fil-A, Dunkin’ Donuts, Wendy’s, and Burger King have been subjected to similar suits. McDonald’s, however, probably still holds the record for the most lawsuits against a fast food chain. Many of which involved intellectual property claims, but many of which also revolved about specific items on the menu.

Starbucks, in turn, has been involved in many cultural controversies, most recently the supposed war on christmas. Starbucks was accused of being anti-Christmas when their
holiday cups were merely red. But organisations have often threatened boycotts against Starbucks, some of which were based on accusations that later turned out to be hoaxes.