Germany is one of the European countries who has felt the aftershock of the Syrian conflict the most, having taken in what is thought to be over a million migrants in recent years. It comes as no surprise, then, to learn that Angela Merkel is keen to find other solutions. One of the most recent suggestions has been to create so-called ‘safe zones’ in Syria, to guarantee the safety of citizens in the war torn country. 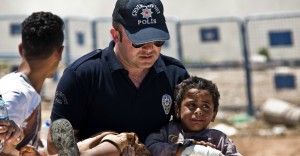 Unfortunately for Merkel, not everyone seems to agree with her. The United Nations have dismissed the idea, unless the absolute safety of Syrians could be guaranteed. Aid workers have also said this is a flawed plan. The idea was to create areas in which ceasefire was assured. These areas would have to be heavily guarded in order to ensure the safety of those within. As the UN stated, it could be extremely difficult to keep these areas safe from rebel troops.

Both the United States and Russia organised peace talks and the cessation of hostilities in February of this year, however these have since fallen through. Negotiations in Geneva were called to a halt when the opposition walked out and said that the peace talks were off. Since then, there has been talk of sending in ground troops in an attempt to overthrow Assad and his regime. President Barack Obama has warned against both the US and the UK military carrying out this kind of attack.

The fact is, there does need to be a solution for the migrant crisis. With experts warning against creating ‘safe zones’ in Syria, it’s time for the UN to go back to the drawing board and come up with a clear plan. Thousands of refugees are now camped outside of Turkey, unable to cross the borders. The EU-Turkey agreement to send back those from the Greek islands to Turkey has also come under fire.

There needs to be a solution and fast, if Europe is going to be able to withstand the influx of migrants trying to enter. But also, and most importantly, to save the lives of thousands of people fleeing the war torn country of Syria