Recently, Emirates airline made a flight along the route that is currently recognised as the longest, non-stop commercial route in the world. The route starts at Dubai and ends up in Auckland, New Zealand. They are currently the only airline to do this, but it doesn’t look like they will be able to hold onto this title for long! As of December, Qatar Airways has announced that they too will be flying on a non-stop route, flying between Auckland and the capital of Qatar, Doha… which just so happens to be a longer non-stop route than the one the world has currently recognised as the longest. 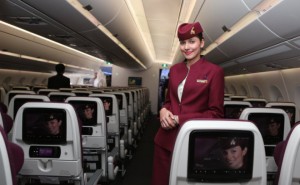 Qatar Airways have said that the distance of their non-stop route is a whopping 9,034 miles, which makes it more than 200 miles longer than the route that Emirates take on their non-stop flight – a journey that sits at 8,833 miles long. The airline announced this new non-stop flight route while at the ITB Berlin International Travel Fair and said that this step forwards is part of a plan for a wider expansion of the Qatar Airways network. As well as adding this longer, non-stop flight as of December 3rd, the airline also announced that they will be adding 14 brand new flight destinations to its list of stops available, opening their services up to even more passengers. We don’t know if there is a huge demand for those who want to fly from Doha to Auckland, but we have a feeling it’s not just to do with the number of people flying. This is a power battle, between two of the biggest airlines in the world. When Emirates boasted about their Dubai to Auckland route, Qatar sat and pondered how they could go one better.

When flying the new route commences, flights will begin to be operated on a daily basis, both there and back. The fact that it is operating daily means that there must be some kind of demand for this extremely long haul flight. The plane used for these long haul flights will be a Boeing 777, and passengers can expect to be on board for a long 17 hours and 30 minutes on the way there, and a slightly shorter time of 16 hours and 20 minutes on the way back. Currently, the flight between Doha and Auckland takes a minimum of 18 hours and 30 minutes, plus the time it takes for transfers (usually in Sydney). Passengers won’t be too bored while in flight, however, as the plane will have 3,000 entertainment options – 550 movies, 1,400 TV show episodes, 50 games and 1,000 audio selections will be made available to passengers during their time in the air, along with free onboard Wi-Fi too. Both Emirates and Qatar Airways are renowned for adding a little bit of luxury to the journey, so you’re hardly going to be desperate to get off the plane; even though it takes so long.

Still One Step Behind

While Qatar Airways will definitely have smashed Emirates record for longest non-stop flight, neither airline has managed to beat Singapore Airlines Flight 21 service, which flew non-stop from Singapore to Newark, covering 9,534 miles – the longest non-stop route ever. Unfortunately, the company didn’t make enough money from the route and so it was discontinued back in 2013. Still, it proves that longer flights can be done if the airlines think they’re worth the money. Again, we just can’t imagine how many people want to fly from Singapore to Newark every day…It’s just a show of power and skill, to be able to carry out such long flights.

Will Emirates retaliate with an even longer, regular flight? As one of the best airlines in the world, it wouldn’t surprise us if they let Qatar win this race and focus on their other, incredible accolades instead