Despite evolving much later to our current state than wild animals, humans tend to feel that animals are infringing on their territory and must be kept from doing so. In individual households people might call exterminators, farmers might use a fence to keep predators from their herds and hunters are allowed to shoot animals that are deemed too many. 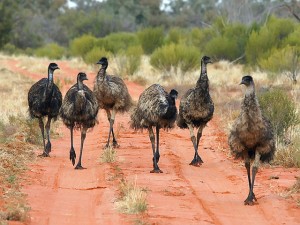 In some cases, the animal intrusion is too big to be handled by an individual human and the cavalry needs to be called in. Sometimes even in the literal sense.

In 1932 Australia was going through a bad drought and as a result, crops were becoming scarce. But Australian farmers had to face another danger: a herd of 20,000 roaming emus. The emus had reached the Australian wheatbelt region and were by turns trampling and consuming the farmers’ crops.

The farmers did not know how to help themselves and petitioned the Australian Ministry of Defense. Since the situation was indeed dire for the humans and their crops, the ministry acted swiftly and deployed a whooping three soldiers to defend the wheat.

The soldiers’ orders appeared to be simple: They were expected to shoot at least one hundred emus a day and – a useful side effect – collect their feathers to decorate the Australian cavalry soldiers’ hats.

There was one small problem. Emus are notoriously difficult to hunt. With them being the second largest bird in the world – only the ostrich is bigger – one would expect that they make easy targets. But despite weighing up to 90 pounds, they can run up to 31 miles per hour. That they weigh up to 90 pounds also means that emus have a rather large layer of fat – large enough, indeed, to be able to withstand bullets, especially bullets from weapons from the 1930s. In the case of the war against the emus the Lewis gun was used.

The “Great Emu War”, as it became known jokingly, was an absolute disaster for defense minister Sir George Pearce. Though official numbers were never published, the three man army most likely shot less than one hundred emus all in all. And people ridiculed Sir George Pearce for not having a feather to stick on his hat.

Sir George Pearce insisted that the war on the emus was not only to help farmers, but also provided excellent target practise for the soldiers. Financially, the war was not too expensive for the government, as the farmers themselves had to provide food and accommodations to the soldiers. Major Meredith, who lead the operation, tried to spin the war as a success at least in terms of casualties on the Australian army’s side. His report proudly stated that the army suffered no casualties.

While the first attempt hardly proved successful in terms of killed animals, a second military operation against the emus was started a few months later. The second operation, by all accounts, was more successful than the first. Nevertheless, the government refused to send military assistance in 1934, 1943 and 1948, when the farmers once again asked for help. It is perhaps not surprising that the government did not deploy military personnel to fight birds while a world war was raging.

Eventually, the government decided to erect a fence to protect farmers from emu attacks. Originally, the fence was 134 miles long but it has since been expanded further and further and measures 727 miles. The new and longer fence, however, was not built to protect the area from emus, yet rather from wild bunnies. The roughly 700,000 emus still roaming in Australia have not been involved in a war since 1932.

The fact that Australia once declared war on the emus does not mean that the emu is not of great cultural significance to Australia. The bird is endemic to Australia and is depicted both on coins as well as on the Australian coat of arms.