It is one of the most talked about civil wars of our time, with countries around the world feeling the ripple effect of the war in Syria. As millions of people flee the country and the battle wages on, it seems as though this conflict will never truly be over. Of course, when you look at other, similar wars, it’s clear that these things can go on for decades. 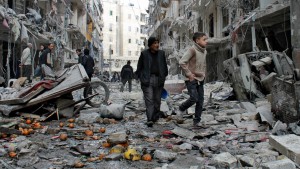 The Korean War (started in 1950), the War in Afghanistan (started in 1978), the Karen Conflict in Myanmar (started in 1949) are all ongoing wars with seemingly no end. Although none quite as deadly as the Syrian War, they’re all proof that bringing this to an end is no overnight job. Let’s take a look at what is happening now and how this dreadful war can be stopped.

What is the Syria Conflict?

The war in Syria is easily one of the most complicated wars of the 21st Century; simply because there are so many different parties involved. It’s not just a case of one versus another, as different terrorist groups and activist organisations have piggybacked onto the chaos. The Syrian War started off as an uprising against the Assad family, who have been in power since 1971. While the Assad family are not extreme in terms of religion (something which caused the Arab Spring conflicts), there are other issues which have caused unrest in the country. Calls of corruption and broken promises are just the beginning of Syrian worries. The real trouble began when some children caught spraying anti-regime graffiti were killed in detention, back in 2011. This caused violent protests, more killings, and the beginning of the Civil War.

However, this is now not just a case of the people versus Assad. Various rebel groups put together their own armies, in an attempt to overthrow the government. This led to more extreme fighting in the country, killing thousands of civilians along the way. Organisations from both sides have been forming armies and fighting one another, causing severe devastation in Syria. There are even some groups who aren’t really fighting for anything; simply taking advantage of the chaos and lawlessness.

How Can it End?

With an estimated 100,000 people killed in the conflicts so far and millions of displaced refugees fleeing the country, an end to this bloody battle cannot come soon enough. However, there is the worry that this kind of war could rage on for decades – like some of the others we mentioned earlier. There are several ways the War in Syria could come to an end, including:

As you can see, there doesn’t seem to be any clear resolution for Syria and its people right now. Which means that predicting when this awful war will be over is somewhat impossible. Will the War in Syria ever truly be over? Not for a very, very long time if you ask us.